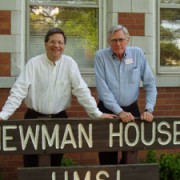 Bits of Newman History… in the words of Fr. Bill Lyons
1) Start of Newman House: in 1964 by Cardinal Ritter…Any young adult was welcome..

2) The Cardinal was wanting to make sure that the large number of Catholic students at the St. Louis campus would have the services of a chaplain and a Catholic worshiping community… As the years went on it was by far the largest gathering of Catholic students in the state of MO…High Schools and colleges…this is my statistic…not scientific…But in no time we had about 7500 Catholic students on the campus…

3) the Archdiocese paid the expenses through a grant each year…I do not know of any particular opposition at that time or any time…It seemed to me that the embryonic campus was very anxious to have good relations with the STL community and Catholics’ make up a good percentage there…When I came, for instance, there was a column in the student paper, the “Current”, which was entitled “Activities at the Newman House”…My sense has always been that the university appreciated our presence on board…

The early years were from the middle of the Vatican II Council for the next decade…They were exciting times with the Sunday night liturgy in English for the first time and much freedom about what kind of music should accompany the Liturgy…I can remember one Sunday evening there were about 120 students crammed into the house…The altar would be in the living room just to the right of the front hall, so it resulted in it being in the “heel” of the ground floor…Thus people could be in the living room, front hall and dining room and still be able to see the altar…

In the very early years the house was the best place to have lunch…On campus it was vending machines galore…The basement became a favorite meeting place and snack spot…On any given day there would be at 9:30 a.m. [just after first class] anywhere from 20 to 40 students gathering for coffee, cokes etc…

My time was taken up with the Liturgies, with counseling, confessions and with my teaching position in the Communications Department on campus…That sprung from some “get acquainted” days at the House…Students liked what we were doing and it was similar to a basic communication course…I only took one class each semester; but, it put me on the faculty and that was a good segway for the Catholic Chaplain…

4) …the big growth spurt was in the mid sixties when the facilities on campus were just beginning and when the student numbers were fairly high [6500 in 65=a guess]…Our place  was the meeting place…As time went on, and the university developed the services we were providing, much was absorbed by the university…That left a more of a core Catholic group to plan retreats, days of communication, inner city attempts at helping…The numbers were not as great; but, the type of believing young people was wonderful…

One of the retreats we had each winter was from the day after Christmas until the afternoon of New Year’s eve…It was right at the house…starting at 9:00 a.m…paper bag lunch which the students brought…Then we would go out for pizza or whatever at about 7:30 p.m. and the gang would go home from there, so they would be ready to go at 9:00 in the morning…Other retreats were at Gethsemani KY with the Trappists or at Ava, MO with the same monks…

History of Our Newman Namesake:

Did you ever wonder why it is called a Newman Center?  I confess I did not when I first walked through the doors at 8200 Natural Bridge Road.  I just knew it was a good place to meet quality people for whom faith mattered.  I have since learned a few things about the patron of the center, Saint John Henry Cardinal Newman, who was beatified by Pope Benedict XVI on September 19, 2010 and canonized by Pope Francis on October 13, 2019. 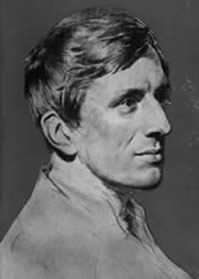 He was born in London in 1801, the son of a banker.  He matriculated at Trinity College, Oxford, and was ordained for service in the Church of England (known in the U.S. as the Anglican Church) in 1821.  He was known as the founder of the Oxford movement, dedicated to combat the influence of the state over the Church, and there wrote a series of tracts to establish the links between the earliest church and the Anglican Church.
Gradually his studies, particularly of the 39 Articles, led him to an understanding that these foundational documents of the Anglican Church were directed not against the Roman Catholic position but against popular errors and exaggerations of the Roman Catholic teachings.  Shortly thereafter, he left his teaching post, prayed and studied extensively for three years.  He became convinced that the Church of Rome was the true inheritor of the apostolic succession and converted in 1845.
When Catholic students finally began to study at Oxford in the 1860’s, a Catholic Club was formed.  In 1888 it was renamed the Oxford University Newman Society, named after the convert who came to know the truths of the Catholic church there.  This began a ‘tradition’ of having a Catholic presence at non-Catholic universities.  UMSL’s Newman House is a descendant of that first group of Catholic students at Oxford.

This concept of a Catholic campus center spread quickly to America and in order to meet their spiritual and intellectual needs, Catholic students at the University of Wisconsin-Madison formed the “Melvin Club” in 1883; they met in the house of a woman named Mrs. Melvin.

In 1890, the year of Cardinal Newman’s death, one of the students from the “Melvin Club”, Timothy Harrington, began graduate work at the University of Pennsylvania. Together with John Gilbride, James and Joseph Walsh and the assistance of Father P.J. Garvey, pastor of the local St. James Catholic Church, they established the first “Newman Club” in the United States in 1893. The “Newman” Movement became the name for the Catholic Church’s presence on non-Catholic campuses in higher learning in this country. The “Newman Club/Center” became the name of the various student organizations on each campus.

Early in the 20th century Pope Pius X stated in an encyclical letter that religious formation must be made available to students in secular institutions of higher learning.

The centers provide pastoral services and ministries to their Catholic communities, in particular to the Roman Catholic student population within the universities. However, since these centers are located on university campuses, Christians of other denominations often come and participate as well.

God has created me to do Him some definite service.
He has committed some work to me which He has not committed to another.
I have my mission. I may never know it in this life, but I shall be told it in the next.
I am a link in a chain, a bond of connection between persons. He has not created me for naught.
I shall do good; I shall do His work.
I shall be an angel of peace, a preacher of truth in my own place,
while not intending it if I do but keep His commandments.
Therefore, I will trust Him, whatever I am, I can never be thrown away.
If I am in sickness, my sickness may serve Him, in perplexity, my perplexity may serve Him.
If I am in sorrow, my sorrow may serve Him.
He does nothing in vain.
He knows what He is about. He may take away my friends.
He may throw me among strangers.
He may make me feel desolate, make my spirits sink, hide my future from me.
Still, He knows what He is about.

Want to join the discussion?
Feel free to contribute!

We have a lot going on this week! We hope to see

Mass is tonight, 6:00 pm, in the Provincial House

Join us tonight for Mass and Soup at Newman! 5:30

Here are some pictures from yesterday with our gro

Pray for our 11 students (and thousands of others)

As 2022 comes to a close, we are forever grateful

Merry Christmas! We hope that the light of Christ

Stop by the Newman Center anytime between 11 and 6

Mass for the Feast of the Immaculate Conception is