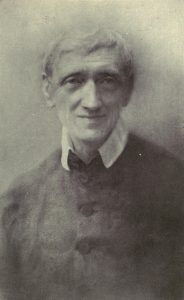 Many people are unfamiliar with where the name ‘Newman’ comes from in the ‘Newman Center’. One of the most common assumptions is that it stands for ‘New-Man’, signifying the Newman Center as a place of personal renewal.
In actuality, the Newman Center is named after the English Cardinal John Henry Newman, one of the most influential Catholic thinkers of the 19th century. Of course, we are also not the only Newman Center, not by a long shot; there are more than 2,000 Newman Centers at non-Catholic colleges and universities in the United States alone, with more around the world.
John Henry Newman was born in 1801 in England, a nation where ‘Catholic’ was very much a dirty word. Since Henry VII formed Church of England Catholics had been second-class citizens. Many died as Martyrs for the crime of being Catholic. It was only in 1791 that going to Mass or being a priest (as long as they made an oath of loyalty to the English Monarch) were once again legal. There were no Catholic dioceses in England, and Catholics made up about 1% of the population.
While at boarding school, Newman experienced his first conversion experience. Given some religious books by one of his teachers, the spark of Christian faith was placed into his heart. Newman became a fervent Evangelical Calvinist. Newman then started his university career, attending Oxford University. He had always been a studious young man, but as many current students can relate, he suffered from severe anxiety. Living out the nightmare of students everywhere, Newman had a panic attack during his finals and bombed them all.
However, thankfully, grades don’t actually determine your future. Newman was given a teaching position at Oxford and soon after was ordained a deacon and later a priest in the Church of England. As a part of his academic life, Newman studied the faith more deeply and found himself drawn more and more to Catholicism. Around this time, due to a variety of factors, including a wave of French Catholic immigrants escaping the French Revolution, Catholicism was becoming much more normal in England, and in 1829 they were given (almost) equal civil rights. Newman found himself the intellectual head of the Oxford Movement, a movement of academics and Church of England leaders seeking to reform the Anglican Church along more traditional lines. This led to the Anglo-Catholic tradition, but for Newman and many others, this exposure to Catholicism was not enough. Newman proceeded to convert to Catholicism, along with many of his peers in the Oxford Movement. With Newman as a leading figure, Catholicism became established once again as a common and public form of faith in England, founding schools and institutions of Catholic education.
As an acknowledgment of what Newman did for the faith, Pope Leo XIII made him a cardinal of the church. Similarly, despite his protests, Newman Clubs started popping up at non-Catholic universities to show that the Catholic faith can not only survive, but thrive, in environments that don’t necessarily support it. This year on October 13, Pope Francis will canonize John Henry Newman, recognizing him as not only a holy man on Earth, but one of the countless souls in Heaven, standing before the throne of God asking for divine help for all of us. St. John Henry Newman, pray for us!

We have a lot going on this week! We hope to see

Mass is tonight, 6:00 pm, in the Provincial House

Join us tonight for Mass and Soup at Newman! 5:30

Here are some pictures from yesterday with our gro

Pray for our 11 students (and thousands of others)

As 2022 comes to a close, we are forever grateful

Merry Christmas! We hope that the light of Christ

Stop by the Newman Center anytime between 11 and 6

Mass for the Feast of the Immaculate Conception is